A Compassionate Concept for Every Community 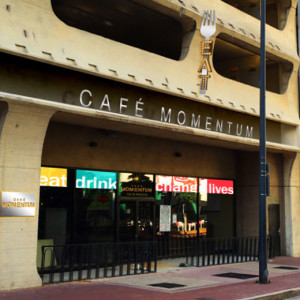 The other night my boyfriend and I were walking to the local sushi joint about a block from my house.  As we got closer, we noticed that people were going into Café Momentum across the street. I had heard of Café Momentum and had told Marty about it awhile back. We had both wanted to try it, but it is only open on Thursdays, Fridays and Saturdays.  This was the first time we had happened by the place when it was actually open!

The restaurant concept started with just pop up dinners at different places around Dallas back in 2011. But, a year later Chad Houser, the head chef of Parigi, resigned his position there to become the executive director and head chef of Café Momentum. I’m not sure when the place found its physical home on 1510 Pacific St. in the base of a parking garage in Thanksgiving Square. You may be thinking “Sandy, you usually don’t do restaurant reviews. What’s up?”  Well, the cool thing about this restaurant concept is it is a post-incarceration program for young men who were locked up before their 18th birthdays and for the most part written off by society at large. It is a paid apprenticeship program that allows the young men to learn every aspect of the restaurant business and earn an honest wage in the process. Café Momentum is a nonprofit that’s supported by foundations and private donors, as well as the patrons’ checks.

So, when Marty and I saw that the place was actually open, we stood on the sidewalk looking across the Dart rail at the people filing in and then back at each other like “Well, what now?” We had our mouths set for sushi – – you know how your mouth starts looking forward to the food that you are heading toward. But, we had long wanted to give this place a try and had no idea what kind of food they served or what to expect. So, we shrugged at each other – “Let’s just go at least check out the menu.”

We crossed the tracks and entered the place to a beaming welcome from a beautiful young lady and young man. Perfectly polite they gave us menus to survey and pointed us to a place to comfortably peruse them. Frankly, we were already sold after smelling the aromas as we came through the door.

I guess we were just expecting a casual diner, but the menu had four upscale courses from which to choose – things like beef braciole and smoked carrot papparadelle with chicken mole sausage. Everything looked amazing to the point of making any kind of decision difficult. This was the kind of place a young man could feel proud to be a part. And proud they were.

Our waiter, I’ll call him ‘E’ since I don’t know if it would be proper to use his real name, was smiling the whole time – direct, honest and engaging. You could tell he was nurtured, encouraged and supported by the environment. He told us early on in the meal (without shame or pretense) “You know, we were all in lock up before this.” His direct eye contact told us that that was firmly in his past. He also delighted in telling us that he would be on a morning show at 6:30 a.m. the next morning and had just been featured in the Dallas Morning News. He beamed with authentic happiness for his newfound position and we felt special to share in the moment and be able to encourage and commend him for what he was accomplishing.

We could feel the same energy from all the tables around us. The patrons radiated warmly as they knew they were doing something wonderful in supporting these young people. And the staff seemed to be in full bloom from the feeding and watering of the spirit that they’ve received in this environment over time. At the end of a completely fantastic meal and evening we were able to write a message of thanks to our waiter on a comment card and then more publicly on a wipe wall that fills up over the course of the evening. I could tell my boyfriend took as much pleasure as I did in writing a personal note to ‘E’ on the wall. There was nothing we wanted more in that moment than to let him know our sincere thanks for his excellent service and well wishes for his future. Each night they take a picture of the wall for the guys to keep before they wipe it clean for the next evening’s operation in which they will inevitably receive more love, encouragement and support.

If everyone had a chance to dine at a place like Café Momentum occasionally, we’d all get a reminder of how good compassion feels. We’d be reminded how a little acceptance and encouragement can go a long way, how young people can be lifted up by the knowledge that there are good and positive people in the world that want good things for them.

My hat’s off to Chef Houser. In a recent interview he said “If someone gave me a gazillion dollars and told me I could hire anyone in the world, I would still hire these guys.” The man’s heart is in the right place and he was recently recognized for this and his work with Café Momentum by being honored as one of the country’s Ten Outstanding Young Americans. Other recipients of this award given out by the United States Junior Chamber include men like Elvis Presley, John F. Kennedy and Kurt Warner.

“There is definitely more dancing going on in the kitchen than any other kitchen I’ve ever worked in,” Houser joked in one of his interviews. Having been there, I know why. So why can’t we put one of these compassionate second chance operations in every community? Maybe we can. Let’s put some momentum behind it! Blessings!