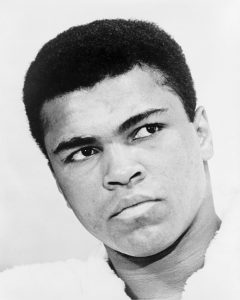 As they lay Muhammad Ali to rest today, this blog post is in tribute to his great life and great example to us all to be our authentic selves. This man marched to his own drum, recited his own self-promoting poetry before delivering on his promises in the boxing ring. Who in the world ever did that before Ali? Nobody.

At the tender age of 25, Ali had the guts to stand up to the U.S. government as a conscientious objector to the Vietnam War because of his religious beliefs. He had to know that fight would not go well. And, it didn’t. He was stripped of his heavy weight title, convicted of draft evasion, sentenced to five years in prison (the time wasn’t served due to the appeal process), fined $10,000 and banned from boxing for three years.

These were prime years of his life and career. He perservered, got back into the ring in three years, and began to fight his way back to the title as he simutaneously slugged it out with the government.  The U.S. Supreme Court overturned his conviction for evading the draft in 1971, and 7 years after being stripped of his title he reclaimed his heavyweight champion belt by beating George Forman at the widely publicized fight, “Rumble in the Jungle” in Kinshasa, Zaire.

The man knew who he was and what he wanted in life. I think it was his deeply spiritual nature that led him to follow his inner voice and authentic path. One of the coolest things I’ve ever heard about him is from Maryum, his daughter, who said he would always tell her, “Say your prayers before you eat. Worship and exercise your spirit as much as your body.” He did and he was ‘The Greatest’.
Sandra M Bell
Author of “Lunchtime Joy Magnet” & personal coach