An Authentic Life or Pleasantville? Hmmmm?! 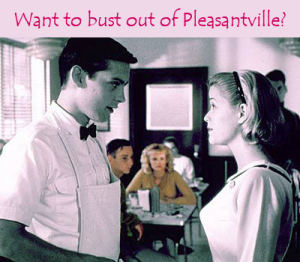 I watched a rerun of Pleasantville the other night and the movie hit me much more deeply than the first time. So into it, I found myself mindlessly snarfing down a second batch of popcorn. It stirs the same conversation we are having on this site on authenticity.

For those who don’t remember the premise, two modern day teenagers get transported (by Don Knox, God bless his soul!) into a 50s television show called Pleasantville. In this seemingly idyllic little town, dinner is always served promptly at 6:00 pm, mom cleans house in her dress, quintessential pearls and heels, and all kids are super perfect. Everyone mindlessly sticks to their routines and never questions them, what their taught or most importantly their feelings.

The two modern-day characters, David (Tobey Maguire)  and Jennifer (Reese Witherspoon), unwittingly start waking the town up just by being their normal selves. One by one citizens began to question what was outside their little town and what they were being taught. They started to question their routines and why they had to do things the same way they’d always been done. People began to think for themselves, feel their sexuality and authentic power for the first time and as they did they became apparently different with a capital D, as they turned technicolor rather than the old pasty gray shades of black and white. By the end of the show the stodgy citizens that were determined to keep things as they had always been, put David on trial (for using colorful paints and a sundry other egregious violations). As David spoke out for himself and the citizens of Pleasantville, you could see people in the courtroom thinking and feeling for themselves for the first time and turning technicolor one by one! My favorite line is when the judge finally yells “Stop at once! You’re out of order” And David says – “That’s just the point! You can’t stop at once because you can’t stop something inside you.”

As the awakened citizens go outside, they see the world in a brand new way, in technicolor. The movie ends as the main characters laugh with each other about how sweet it is to not know what would happen next.

I’ve lived my version of Pleasantville where I thought it was my job to smile and nod, be agreeable, pleasant, go along to get along. I tried to control my life, stick with routines, nose to the grind in jobs I had no interest in. I followed other people’s expectations of what my career and life should be and look like and for decades felt the grayness of not living in alignment with authentic self. After years of pushing down feelings, gutting up and trying to be a good trouper, by the age of 40 my health was failing, I lost 25 pounds in two weeks and baffled doctors just decided to kill off my thyroid for lack of a better plan. You can slowly die from the stresses of not addressing what is inside you — for not living your authentic path. I know this and want nothing more than for you to know this on the deepest level. There’s a better way; let’s go there. Blessings!