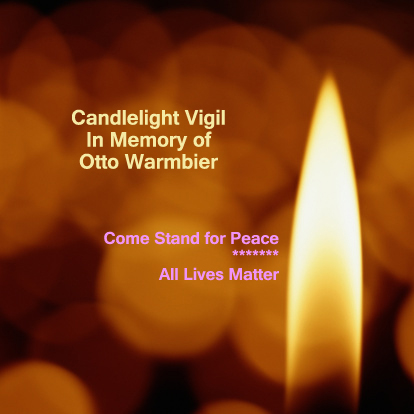 Single Flame From a Candle

The news of Otto Warmbier’s death struck me more than any other horrific piece of news lately. And, the news keeps resonating; it’s like a warning bell that won’t go off. It’s like I’ve been taken beyond any reasonable point of acceptance.

I hate to say, but in some ways all the horrendous news leading to this event had been digested and somehow accepted. It’s sad that we are all becoming desensitized to the never-ending lineup of news stories of senseless violence. But, we can’t let that happen. We can’t become a society that says, “Oh well, that’s just the world we live in now.” And, I’ve been hearing people say just that! We just can’t become a society, a world, that says “Oh that’s so sad,” while secretly thinking “Thank God it wasn’t my family” and going on about our happy way.

For me, this one hit directly in the heart. It’s where my heart cried out “Enough is enough.” For all of us who believe in a peaceful world and peaceful resolution to any problem, it’s time we stand up, peacefully, and be heard. We have to draw the line with Otto. No parent should have to bury their 22-year-old son because he kept a poster for a souvenir. No parent should have to bury their daughter who attended a pop concert. No parent should have to bury their child because they were walking along a sidewalk in London at the same time a deranged terrorist is on a rampage. We have to stand up and advocate for peace. We have to find ways to work together to reach and educate those with barbaric and twisted ideologies. If you have kids, do it for them. Do it because they are going to have to live in this world long after we are gone.

Did you know that the estimated number of ISIS fighters is in the 10’s of thousands to possibly over 200,000 now? And, they are recruiting from more than 70 countries. If they can recruit online, can’t we target the same susceptible youngsters with peace and mindfulness tactics for taming their inner angst? Can’t we reach out and groom these young men for leadership and life goals that will make them shine with self-worth? Can’t our government along with the U.N. and other human rights groups strategically set out a peaceful and education-driven plan to eliminate brutal and barbaric practices in countries like North Korea? Our politicians spend 100’s of millions of dollars on election campaigns. Our government has a military budget of $582.7 billion. Marianne Williamson and many others have been advocating for a Department of Peace for many years. If we just allocated a fraction of what is spent on the DOD every year toward inner peace and peace-growing initiatives, we could see amazing results. In the U.S. we excel at advertising, social media and content creation. We craft amazingly convincing campaigns in this country. Let’s put those talents to work. Is propaganda only the friend of terrorists and maniacal leaders? We’re smarter than this. There’s a better way and we should be constant advocates against divisiveness, prejudice, hate, violence and nationalism. We are a global community. Let’s start lifting each other up.

I’ll be the first to admit, although I preach and teach inner peace here and usually feel much inner peace in my life, the news of Otto Warmbier’s demise just days after being returned to the U.S. sparked not only a deep sadness within me, but also a surprising amount of anger. Yes, anger! I wanted Kim Yong Un’s head on a plate. I’m not going to lie. That was my mind’s first thoughts, “Let’s put his head on a plate!” But, as I calmed and reflected, I returned to my rational self again, which knows violence never resolves anything. Violence only begets violence. Hate begets hate. It only perpetuates a vicious cycle.

I’ve put together a candlelight vigil in downtown Dallas for those who feel sadness for this senseless violence and all the random acts of violence that have recently plagued our world. If you live here and want to stand with us for peace and remember the Warmbier family in prayer or silent meditation, we will congregate at Klyde Warren Park this Thursday, June 22 at 9:15 p.m., and will disband around 10 p.m. There will be a free concert at the park (unrelated) that will be going until around 9:00, so let’s meet behind the crowd. Bring your own candles (and even extras for those that join us) and let’s light them in our stand for peace and peaceful solutions to what is happening in our world right now. Also, if you are in another city, why not organize your own vigil? You can contact me on my comment form. I will be happy to send you the press release we are using. Please join us to move our world to a more peaceful place!!!