Are You Expanding? And, is that the Whole Point? 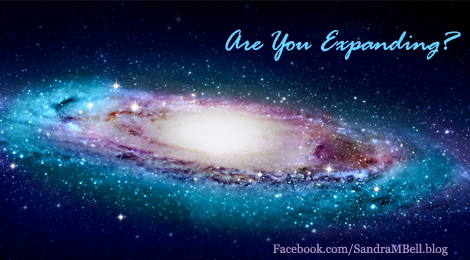 Don’t you love those moments when you first wake up? The bed is warm and cozy; the house is quiet. Most days I wake to a Tarzan yawn from my husband, which I love. He gets up much earlier than me, so this gives me time to feel a bit of luxurious laziness while I reflect on my dreams. Usually they are bizarre and I can’t make heads or tails from them, but sometimes I feel there’s meaningful communication from my higher self.

For instance, last night I dreamed my brother was on a cheerleading squad with me. The squad was practicing. Now, this is something he would never do in a million lifetimes, just sayin’. Then a minute later, my high school best friend’s mom was giving me a carrot cake cupcake with cream cheese icing on it – yum! This was really pleasant because in real life she has past away, and she was one of my favorite people. It was great to see her. All I can surmise from this one is I’d seen a picture of my high school bestie yesterday on Facebook and my mind must have been just fondly reminiscing.

Now, a couple of weeks ago, I had a dream that felt really meaningful because it had to do with thoughts I was having just before bedtime around a long-held recurring query. The thoughts were along the lines of what does God want from this level of consciousness. As expressions of the infinite (children of God, if you will), it’s natural to want to know what the higher self wants from all this. It’s a question that has come up for me over and over. Do you ever wonder?

So, I dreamed a little boy was asking me “What does God want?” And then all night long a song went through my head over and over – just four lines from a song. When I woke, those lines were still playing in my head. In the bleary cozy, warm waking state I had an ahh-ha moment as I put the lyrics to the little boy’s question. The four lines were from Rihanna’s song ‘Work’:

Lovely then! If the message is what I’m interpreting, it speaks to our natural inclination toward adventure, learning, growing — delight with seeing things that are new and different. It’s about expanding our horizons – reaching for the new idea, the new paradigm – growing our personal world as well as the collective. Did you know that supposedly the universe is expanding faster now than it was in the beginning? Wouldn’t it be wild if one day they realize that the growing dark energy that scientist attribute to the accelerated expansion of the universe is actually made up from energy from our new thoughts, new ideas, new experiences, new desires and new fears? Okay, if they do discover that, ya’ll need to all point back to this blog piece, so they can name the phenomenon ‘The Bell Expansion Theory’ – ha!

P.S. Please tell me how you are mixing it up out there. How are you personally expanding? You can comment here or on Facebook…