Following Your Dreams; Flowing rather than Sticking with a Script 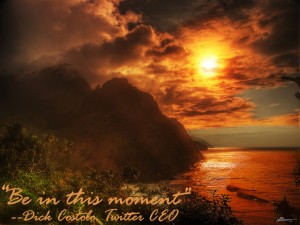 I love this commencement speech by Dick Costolo, CEO of Twitter, so much because he managed to pack a lifetime of wisdom into a 17-minute speech. He talks about the fact that you really can’t know the impact your actions will have, and many times don’t even recognize the impact as it is being made. Costolo talks of making bold bets and taking courageous risks in the direction of your heart’s desires and authentic self, and the necessity of flowing with the moment rather than trying to stick with a script you’ve concocted in your mind.

For me, his story of a life lesson learned in an improvisation class at Second City was the most powerful. He was to enter into an improvisational scene, and as he was backstage he thought up a way he might be able to maneuver the scene for more laughs. So when he entered the scene, he set about trying to move the dialogue in a direction to work with the scene he had devised backstage. The instructor stopped the scene and spoke to the whole class (although Dick knew it was directed to him). He said something like, ” Be in this moment. You can’t plan an improv script. ”

As an entrepreneur I so appreciate this advice — to move boldly, take courageous risks, but stay in the moment. I think it ultimately leads to a better life experience. So many times, I’ve been so  blinded by my own script that I didn’t see all the opportunity presenting itself all around me. This doesn’t mean we should flit and follow every change of the wind. There’s definitely a world of wisdom behind ‘focus’ and ‘follow through.’ The take-away I got from this video was that you should go after your dream, make bold moves toward it, and as you do this, jags in the road will naturally appear that you didn’t anticipate. As you encounter these jags, it’s another chance to check in with your heart as to the direction that resonates most with authentic self. Then, once again, you move boldly in that direction. Many times that path will be a trail you couldn’t have anticipated in a million years at the beginning of the journey. But, as you flow in the direction of your heart, rather than doggedly sticking with a script, you’re able to grow a trust in your intuition and a wisdom or knowing that there are forces greater than ourselves that should be trusted and followed. Happy trails my friends.
Sandra M Bell
Author of “Lunchtime Joy Magnet” & personal coach