Have a Plan, but feeling Stuck? Look to Your Beliefs… 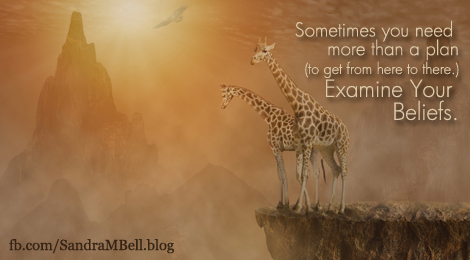 So many times we make plans and move toward them, but at some point feel stuck. It feels like there is an invisible brick wall between you and the thing you desire. You want to write a book, but can never seem to get past the first chapter. You want to meet a good man and fall deeply in love, but keep meeting commitment phobes. You know you are smart enough, hard-working enough, and creative enough, but the monetary affluence you seek is not coming as it seems to for so many others.  You want to rise to the next level. You really want a major victory in your life. But, can’t help feeling stuck in the mud. There are ways to get unstuck. Let’s move forward.

Your beliefs can sometimes be the fly in the ointment when it comes to your plans. You can make list after list of New Year’s resolutions. But, as research suggests, most people fail. Hate to be a Debbie Downer, but, according to the University of Scranton Journal of Clinical Psychology, only 8% of people are successful in achieving their resolution. And, 24% report that they never succeed and fail on their resolution each year. If you find that you have set goals, resolutions or just simple desires, but can’t seem to get from here to there. That may signal a problem in your beliefs, and  time to examine them, as well as ways to clear the negative culprits.

1.) First, Identify the Belief Holding You Back.

What we’re gonna do right here is go back, way back, back into time – when the only people that existed were troglodytes. Hee, hee, that’s reference to a really old song – Cave Man. But in all seriousness, a lot of your beliefs were set when you were a kid and did not yet have the filters to throw out ideas and ways of operating in the world that weren’t the best. Also, you possess something called mirror neurons, which caused you to absorb others beliefs, behaviors and reactions to circumstances when you were young. So, think back.

If your problem is in the area of money, what are your beliefs around it, truly? Do you believe ‘money is the root of all evil’? Do you believe only greedy bad people become super wealthy? Do you think you will be less liked if you become super successful? Was there struggle and strife in your home around money? Did you hear it was ‘hard to come by’ or required ‘a nose to the grindstone’ to make? What is the belief that is blocking you from the successes you desire? Try to narrow down to specific beliefs from specific memories.

2.) Question the validity of your belief.

The trouble with being an ego-based human creature is once we believe something we look for evidence of it in the world. The ego likes to be right. We don’t look for reasons to dispel the belief. However, every event is separate and independent of the next life event. It’s only our thoughts and memories that string them together. Our minds seek to discern cause and effect to try to make a cohesive story from them. Life magically unfolds when there is no judgement or labeling of events. Watch your thoughts and curb the habit of thinking “this is like that” or “this is going to go down just like last time.” To really get unstuck and open up to all possibilities, groom your mind to not project inherited beliefs and past experiences onto life and squish it down into a tiny little box. The ego-mind can extremely constrict our abundant life experience. As pure awareness of the Source gives rise to the infinite consciousness within which we live, all things are possible. There are only but a few universal truths that you can count on, possibly that ‘you are’ and that ‘God is’. Beyond that, we can stop constricting life flow by not projecting our imaginations or prejudices onto reality. Lovingly kiss goodbye any belief that does not serve you. It is just as easy to believe its opposite and look for evidence of real good and abundance in the world, for which you are most definitely worthy. As wise sages tell us, distrust the mind. Pick and chose your thoughts very carefully.

3.) Love Yourself Enough to Kick the Old Paradigm to the Curb

When I was a young adult, I had a few experiences with love betrayals. I strung the events together in my mind and concluded that all men cheat. Of course, my ego-mind then found evidence for this everywhere I looked. For years, I attracted players and cheaters into my reality. Then I finally got tired of the cycle and started working intentionally on getting rid of my debilitating belief. Just as I was asking the universe for help in this area, I went to lunch with a lady in my highrise that I barely knew. During the course of nibbling on our salads, the conversation turned to men and I out and out told her that I was trying to rid myself of the belief that all men cheat. She said “Oh, no. There’s lots of good men out there that don’t do that.”  She said she’d never had that experience at all with men. I was shocked and relieved. She did however have a recurring problem with men and her finances. But, it was during that lunch that I realized I was manifesting my belief and she manifesting her very different belief/fear. From that day on, I stopped looking with distrust at those I dated. I decided I loved myself enough to find a great man and have a healthy loving relationship. There was nothing left to fear because I knew I’d seen all the telltale signs of a player and could turn on my heels at the very first signs of the wrong kind of guy. I knew I would no longer accept anything but the best in this area of my life. And, yes, I did find a great man who loves me dearly – my soulmate, not too long after that.

If you are working on ridding yourself of a negative belief that keeps rearing its ugly head in your reality, ask yourself often “What would someone who truly loves themselves do in this situation?” And, do that – that first answer that intuitively pops into your head.

If you keep feeling stuck you may have a fear of success or of failure. Be tenacious and courageous about identifying these fears as you encounter roadblocks to your goals. Sometimes you may be surprised that you have more of a fear of success than you do of failure. No worries. Be honest with yourself and keep going back to the question of ‘What is the most loving course I can take for myself at this juncture?’ You’re so worth a positive mind and the brilliant future that results from it.

Your mindful practice will pay off as you clear block after block, one at a time over time,and begin to feel that you can never really get stuck again. Blessings!