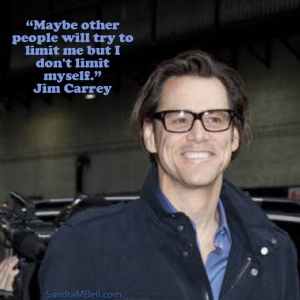 Back in the day when I was a sparky spitfire, just having graduated and hung up my beloved plastic Hog-head hat, I attended a talk that set me on a path of inquiry, specifically in the area of personal beliefs and how they can influence and determine the outcomes of our lives. The talk that day struck a chord; it was entitled something like “You Get What You Expect.” And, it just so happened that I had a propensity to believe this concept because of a poster I awoke to every day of my teenage existence. The wall art was that of a beautiful ballerina draped in pale pink chiffon, on-point delicately in arabesque. It read “If you can dream it and believe it, you can become it.”

The presenter, a rosy-cheeked dynamic speaker, recounted all of these real-life stories of people she had interviewed who had expected certain things in their lives that had come to pass. I bought her cassette tape that day and played the heck out of it as I wore grooves in the Houston highways driving from one sales call to the next in the searing Texas heat. Searing is not the best word really. Any female who worked in outside sales in Houston back then and wore the 80s man-suits with gargantuan shoulder pads, the polyester-silk female version of the bow-tie shirt, panty hose, heels, lugged a big honkin’ briefcase and got in and out of a 200 degree car a dozen times per day in 100+ degree, 120 percent humidity could tell you the most apropos word for it. Let’s just say the surface of the sun would be an upgrade because at least that would be a dry heat. Don’t get me wrong, I love Houston dearly. I always tell people, if you don’t mind the heat, humidity, the crime, the lack of zoning and the traffic – it’s a terrific town. And, I mean that from the bottom of my heart.

As for that cassette tape, I have tried to locate it many times over the past decade or so, as there have been occasions on which I would have loved to share it with friends. But alas, many moves and several audio formats later, the cassette tape has gone the way of my eight-tracks.

One of the stories that still stand out in my mind is one she told of a man who had developed lung cancer. During his interview with her he had said “Yes, I always thought I’d get lung cancer.” In fact, prior to seeing his x-ray, he was asked to draw the cancer on a diagram of a pair of lungs, and he had drawn it in exactly the right spot and approximately the right shape and size as his own cancer. The interviewer said to him, “What made you believe you’d get this?” “Well my father had it and passed away from it,” he said. The interviewer said, “Yes, but your father was a smoker; you’re not. Not only that, you eat right and exercise.”

This made an impression. As a young person, just entering the workforce, I was knocked out by the idea that our thoughts and beliefs could influence our life’s outcome, and even our health to that degree. The speaker had compiled hundreds, possibly more than 1000, case studies of this type phenomenon. The facts laid out that day were staggering, but were made more motivating by my propensity to believe the ‘get what you expect’ theorem, as every day of my teenage years I had awoken to read “If you can dream it and believe it, you can become it.”

After the talk that day, I always kept my eyes open for proof of this phenomenon and have seen it work in people of all walks – athletes, actors, all sorts of famous and successful people. One of my all time favorite examples of this that I ever stumbled across was from an interview Oprah did with Jim Carrey.

He used to drive his car out to Mulholland Drive every night and envision his future as an actor. Carrey said he’d just sit there and fantasize how certain directors would be interested in him, and how various people that he respected would come to him with different parts. At the time, he hadn’t had a big break yet. He said he’d just drive out there every night and do this to make himself feel better. But, driving home he’d think “Yeah, I do have these things. I can see them coming to me. I just don’t have a hold of them yet.” One night he even wrote himself a check for $10 million dollars “for acting services rendered” and dated it for Thanksgiving three years in the future. He said he’d see it in his wallet from time to time disintegrating, but kept working toward his goal – “You can’t visualize and then just go eat a sandwich.” Just before that Thanksgiving three years in the future, he found out he got the part for Dumb and Dumber, which paid him right in the neighborhood of $10 million. Good grief, talk about the power of a positive mind!

There are so many examples like this that I’ve noticed over the years, but I’d love to hear from you. Have you noticed any startling examples of how your or someone else’s thoughts or beliefs manifested an amazing outcome?  Naturally, all our thoughts and beliefs are acted on in some way which always manifests a result in our lives. I’m always interested in hearing the stories of how someone believed outside of their normal life, outside of their normal circumstances, and generated a extraordinary life outcome. Please comment below with your favorites! Blessings!
Sandra M Bell
Author of “Lunchtime Joy Magnet”