Using the Power of Imagination to Manifest a Better Life 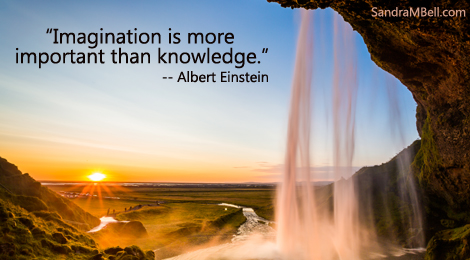 Consciousness is a tricky thing. We tend to believe what we see or are experiencing. But, when you look at ‘what is’ presently, you are really only looking at a manifestation of your past thoughts, beliefs and actions. So, focusing on what presently is can generate feelings of lack or “Oh, well this is what I’ve got to deal with.” It’s this belief in the present that creates a whole lot more of the same. Does this make sense? Because, when we look at the present, we are only looking at the manifestation of our past beliefs, thoughts and actions. To believe “This is the situation I’m stuck with” only generates more of the same reality. You are projecting the past into the future. This is the truth inside the ancient scripture that states we should live by faith not by sight.

Think about what you want. No, not some lame, watered-down version of what your reality could be, but something fantastic. If you can imagine it fully, you can make it happen. You wouldn’t even be able to fully imagine it if it weren’t possible. It is an alternate reality that can in every way be yours. All probabilities for you exist in consciousness (the universal mind) — every possibility you can imagine.

Take inspiration from author Dr. Joe Dispenza, who wrote a great book along the lines of what we are talking about today, entitled “Breaking the Habit of Being Yourself”.  In 1986, he was participating in a triathlon and during the biking portion he was hit by a four-wheel-drive Bronco going 55 miles per hour. When he landed, he broke six vertebrae in his spine. Some of the vertebrae compressed his spinal cord. And, the arch through which the spinal cord passes was broken and twisted like a pretzel. He met with four leading surgeons, all of which gave him little hope of ever walking again and each recommended a radical surgery called the Harrington Rod surgery.

After his meetings with the surgeons and hearing the dismal prognoses, Dispenza decided to not undergo surgery but instead to try to heal himself with thought alone. This led to his intense study of subjects like spontaneous remissions, psychoneuroimmunology, epigenetics, quantum physics, and neuroplasticity.  Long story short, he healed. He walks and he leads a normal life, traveling the world teaching what he knows.

It comes down to being able to imagine and believe a future that is different from what you are currently seeing and experiencing, and not focusing on what currently is. For instance, I have a desire for longevity and aging well. What I don’t do is focus on the reality around me. “Uh oh, well this person that is about my age has this and this going wrong. And, this one has this and that happening. And, look in the mirror. This is starting to get a little sag.” No. Pick a role model that is ten or fifteen years older than you that is doing the aging thing the way you want to do it. If they are 15 years your senior and are already in better shape than you – even better. Pick someone with high energy, vitality, a great figure and fabulous looks. Don’t remind yourself that they are a celebrity with a high-priced trainer, personal chef and have possibly been nipped and tucked – no. Simply, say to yourself, “If they can do it. I can do it.” And, know that it can happen. The intelligence that runs their body is the same intelligence that runs your body. Your intention and belief is the driver. That is your prayer. Tell your mind what will be and let the universal mind work out the details.

It’s so easy to get caught up in the material aspect of the world. Because things have form and look solid, we take it for reality.  The reality is our subatomic parts are popping in and out of existence all the time and there is no real matter of which to speak. If you want to get in touch with your true reality which is highly malleable, watch a youtube video on the famous double-slit experiment. This will remind you that it is not until there is an observer involved that a wave function is actually hardened down to one possible outcome.

Or, read one of the many studies on the Placebo Effect. A good one that truly illustrates the power of the mind is documented in the New England Journal of Medicine. It is a Baylor School of Medicine study published in 2002.  The study involved three groups of patients with debilitating knee pain. One group was given a standard surgery to clear the knee of the causes of inflammation. The second group was given a different kind of surgery that is also standard for removing the knees problems. The third group had incisions made, but no surgical procedure. They were sewed up and salt water was splashed on the incision. All three groups went through the same rehab process and the placebo group improved with the same degree of success as the two surgical groups.

In imagining the outcomes you want for a better future, whether it is for physical health, affluence, an entrepreneurial venture or even a relationship you desire, spend time on the macro and micro details. Be sure to visualize the outcome to the point that you feel what it is like to be in those shoes. Spend time thinking of the actions and lifestyle changes needed to make it happen. Take those actions toward the vision and remind yourself often that it is in the works. Don’t look to your current reality for any type of proof, as that is looking at your past.

With quantum physics they have found it is easier for us to influence the smaller, subatomic bits of our world than it is to influence the larger ones. So be sure to spend time on the micro aspects of what you want. For instance, if you are working on improving your health, envision your cells clear and filled with light, operating at maximum efficiency and in harmony with each other. If your goal is aging well, visualize lengthening and strengthening your telomeres. In other words, do your micro and macro work.

It may even be helpful to your goal to visualize things that happened in your past in a different way. The famous Delayed Choice experiment shows how cause and effect can actually be reversed in the future. So, if there are things you did in your youth that you feel were detrimental to your current health or well-being, spend time on remembering the actions of your youthful self differently, as being much more healthy and responsible. Then, sit and imagine how things are different because of those wise choices and thoroughly enjoy the results that you have envisioned. The mind is a powerful thing. Be patient with this and take any small improvement as your proof of progress. As always, I wish you blessings!